Accredation is the "Exclamation Point" on Decades of Integrity at John B. Ward & Co.
June 15, 2017 by Patricia Chaudoin 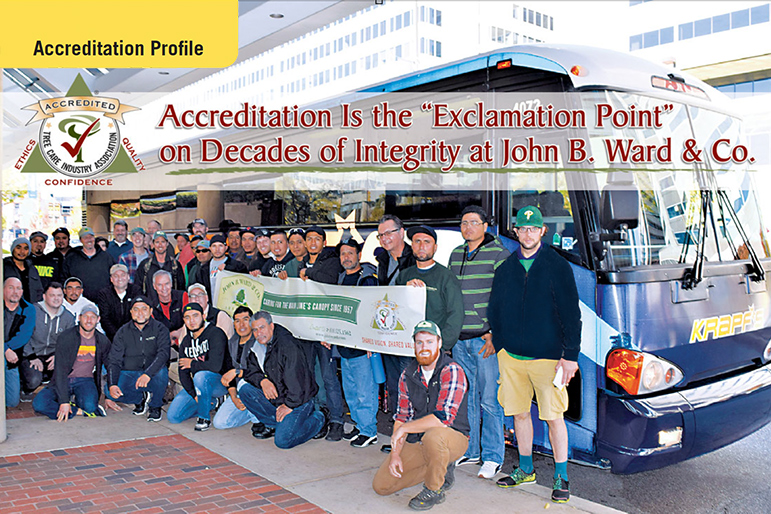 As a young man, Jim Ward worked in the family tree care business with his father’s strong work ethic communicated through everything he did. “He’d say, ‘Always treat clients the way you would want to be treated, in a fair and honest manner,’” says Ward. “Because of that philosophy, we’ve always been known as a company that does things the right way.” As president of John B. Ward & Co., a 29-year TCIA member company based in Bryn Mawr, Pennsylvania, Jim Ward has carried on the family legacy of tree care service started by his father, John, in 1957. That legacy now includes his two younger brothers, Matt and Chris, and his own two sons, James and Pete, both of whom are climbers. From his father and brothers to his sons, each family member in the business has graduated from college with a degree related to arboriculture. Also noteworthy is that the company is celebrating its 60th anniversary this year!

Jim came on board full-time right out of college in 1986 and took over as president when his dad retired in 2003. “He’s 85, and he still comes along every once in a while on sales calls,” Jim Ward says of his dad. “Sometimes we’ll go out to some of the old estates where he once worked, in the western suburbs of Philadelphia, and he’ll see some of the trees he planted that are now huge oaks. That and seeing his grandsons in the business are the real thrills for him.”

His employees are a valued part of the company, according to Ward. “We have a number of employees who’ve been here 15 to 20 years,” he says. “Usually we get new hires based on referrals, sometimes family members of other employees who come in very green. We like to train them ourselves in the correct ways of arboriculture. If they leave – and some of them do – they know they have good, basic tree care skills.”

Ward says the focus of John B. Ward & Co. is large-tree preservation, from maintenance and pruning to cabling, bracing and lightning protection. “The fiber of our community is the big, mature trees we have here – red oaks, white oaks, sugar maples, sycamores and even some big elms we’ve cared for over the years. We actually have tree ordinances in Radnor Township set up to protect our heritage trees. In fact, my dad is the one who began the Radnor Township Shade Tree Committee almost 25 years ago.”

“Randall was very enthusiastic about our risk-management and return-to-work programs, our safety program and our staff performance,” explains Ward. “He said, ‘You have a lot of things (toward Accreditation) in place already. It’s just a natural step to move on to the next level.’ “Some of our competitors were already accredited,” Ward adds. “But what really got my attention was when he said we could actually be doing a better job in some areas.” According to Ward, the hardest part of the Accreditation process was the documentation of policies. “For instance, we’ve always been fanatical about fixing things such as mailboxes or replacing grass that may be damaged during our work, but we weren’t recording these fixes. And we never had used a survey flier for client feedback. Now we have one we send out after every job, along with a thank you.

“It also helped us structure the integration of new employees during their first six months,” Ward continues. “And it helped us develop a proper safe-driver training program. For the most part, though, we were already trying to do the right things, so it was fairly easy to go through the process.”

When it was time to be audited for their Accreditation certification, Ward was equally impressed with the process. “Randall McDonald showed up at 6 a.m. to connect with our safety coordinator and watch how we get out the door first thing. Then they headed off to the job sites, and he spent his time observing and talking to our employees. He didn’t want to talk to us, which is as it should be. We basically just dropped him off and picked him up later. And he wrote up a pretty good review for us.”

“We try to go to EXPO whenever it’s close,” he says, “but this was the first time we took everybody. We met with certain vendors we work with on a regular basis and saw a lot of folks we know from international tree-climbing events. And then we all went out to lunch – it was a lot of fun!”

Ward says being accredited already has proven to be an advantage. “When we got our Accreditation, we sent out a newsletter to our clients, and we heard back from many of them who were very interested in what that meant. It showed that we take our business seriously, that we wanted to better our practices – and that enhances everything we do.

“I would suggest Accreditation for anyone in this business who wants to raise the bar,” he adds. “It separates you from just being a business to being in business. It means going the extra mile to be better and work better. People who value that should seek Accreditation.

“For us, it brought forward what our father taught us over the years, that you treat you clients and employees as you would like to be treated, and when you do, it shows up in your work,” says Ward. “And the exclamation point to that philosophy is the Accreditation process.”