Widely planted before the risks were fully realized.

I remember the Bradford Callery pear trees along South Street in Philadelphia. Planted in the 1960s, they created an allée of dark-trunked, white-flowered magic in May. They have all been removed. Today, many nurseries no longer distribute the tree and some states have banned the planting of this aggressive, invasive, non-native species.

The Bradford Callery Pear tree (Pyrus calleryana “Bradford”) was commercially introduced in the United States in 1961 and featured on the cover of American Nurseryman journal.

It was a nurseryman’s moneymaker: the seedling selection of Bradford pear performed well in the field; young trees were adorned with white flowers in spring and scarlet foliage in late fall; the compact, symmetrical stock transplanted well and tolerated poor soil conditions. An almost perfect urban street tree and an ideal fast-growing flowering tree for new housing developments and business parks, Bradford became the best-selling flowering tree from California to Massachusetts.

Native to China, the species was first collected by the United States Department of Agriculture (USDA) to provide breeding resistance to fire blight, a bacterial disease devastating west coast pear orchards. Bradford was a seedling selection from the original seed collected in China by Frank Meyer, a plant explorer extraordinaire responsible for many plant introductions, including soybeans and the Meyer lemon. The original breeding intentions were superseded by the tree’s ornamental qualities. We started to learn of the structural problems of the Bradford pear in the 1980s, when 20-to 30-year-old trees began to split and fall apart due to tight branch attachment junctions and included bark (which results when two bifurcating limbs grow too closely together). As arborists, we began to reduce, thin, and cable the densely branched symmetrical crowns. It became obvious that the perfect urban tree had a flawed structure. 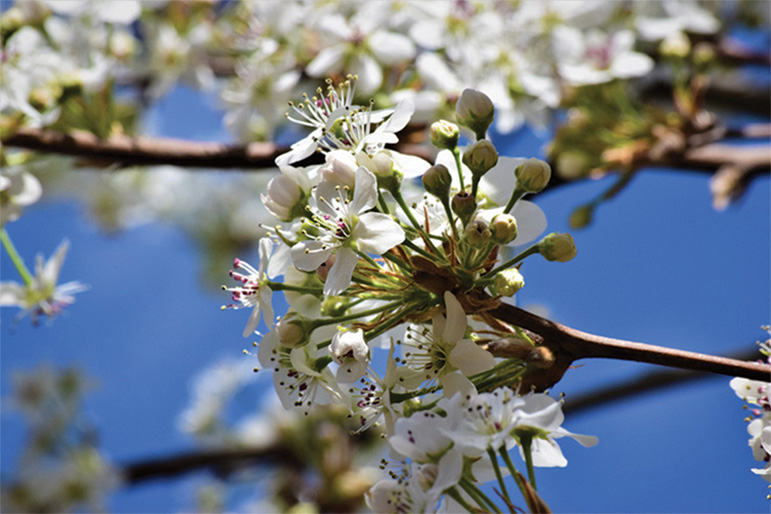 We did not have an invasiveness problem back then as the Bradford pear was self-sterile and required cross-pollination to set seed. But new varieties with improved form were introduced: “Whitehouse” and “Capitol” in the 1980s; “Chanticleer” in 2005 (named “Urban Tree of the Year”). The varieties introduced trees that began to cross-pollinate with Bradford, producing nutritious small fruits that provided forage for some bird species. Robins devour the ripe fruits from the tree in the fall, chickadees forage the ground in winter. The seed is thus dispersed far and wide by the birds, germinating in open fields and disturbed areas by rail and highway lines. These neglected areas sprout Bradford pear plantations. The seedlings revert to the wild, thorny Bradford pears that are now well established throughout the states.

Ever multiplying, the Bradford pear has developed into an ecological marauder.

Introduced for their disease resistance, Bradford pears have developed susceptibility to pear trellis rust and, ironically, fire blight – the initial reason for collecting by the USDA. The arbitrary introduction of the Bradford pear into North American urban and suburban landscapes, and the consequential establishment of this invasive species, is part and parcel of our age of globalization.

The Benefits of Mulch

Mulch instantly gives a finished, beautiful appearance to your landscape. However, quality mulch provides trees and plants many benefits beyond aesthetics.