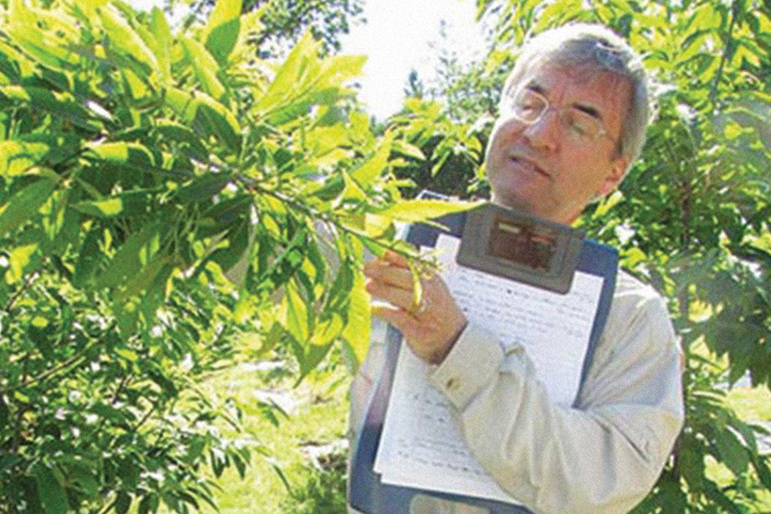 Encouraging news for a legendary hardwood tree. Current research has made a significant breakthrough in the development of a blight-resistant
American Chestnut tree.

In October 2016, we invited Dr. William Powell to speak at the Tree Canopy Conference we cosponsored at Haverford College. Dr. Powell is the Director of the Council on Biotechnology in Forestry at ESF SUNY in New York State, and a Co-director of the American Chestnut Research and Restoration Project. He has led a research team in developing transgenic new strains of American Chestnuts resistant to the blight that devastated billions of chestnut trees in North America in the 20th century.

That's the first step in the process. Next, the clone needs to be hybridized with various genotypes from different North American regions, which will result in genetic diversity of the new blight-resistant American Chestnut tree. The blight-resistant trees are being grown at plantations around Syracuse, NY. Because the transgenic trees have not yet been through the full federal approval process, their growth must be monitored, the plantation sites must be available for inspection, and the research team must ensure that they do not reproduce yet.
According to Dr. Powell, the trees are still too young to reproduce. He hopes that by the time they are old enough, which is likely to take at least seven years, the necessary approvals will have been granted by the USDA, EPA, and FDA. In the coming years this restoration project will be able to produce and distribute millions of blight-resistant American Chestnut trees for reintroduction into our American forests. Once again, this keystone species will fill the void in the forest canopy. Future generations will be able to hike through forests, smell the summer-flowering chestnuts, and observe and enjoy the animal and insect life interacting with American Chestnut trees.