Laurel Hill Cemetery's legendary 'witness tree' is felled
May 31, 2016 by Edward Colimore, For The Inquirer 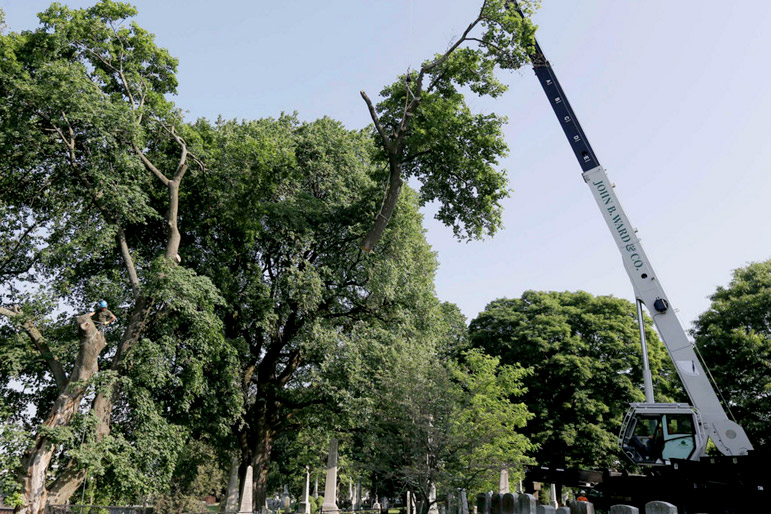 The tree was a living link to more than 160 years of Philadelphia history, and a favorite spot for tourists and history buffs.

Ulysses S. Grant, Benjamin Harrison, and Rutherford B. Hayes - all Civil War generals and U.S. presidents - once sheltered beneath its branches at Laurel Hill Cemetery in the city's East Falls section. Legendary Union Gens. Philip Sheridan, William Tecumseh Sherman, Joshua Lawrence Chamberlain, and Dan Sickles were there, too, on the same gentle slope overlooking the Schuylkill.

They bowed their heads next to a Norway maple, standing like a sentry over the grave of a comrade, George Gordon Meade, victorious commander at the Battle of Gettysburg whose heroism helped save Philadelphia from Confederate invaders and prompted the city's elite to give his family a house in gratitude.

Meade was a larger-than-life figure in war and in peace, serving on the Fairmount Park Commission and often riding his former warhorse, "Old Baldy," in the park near the then-future site of Memorial Hall, where an equestrian statue of him now stands.

The aged tree near his modest tombstone was the living witness to that time and so treasured by Laurel Hill and friends of the cemetery that they babied it over the years, even hiring an arborist to prune it and tie up fragile branches with metal cables to stabilize and strengthen them against the wind - a tree version of a senior's walker.

On Saturday, that slice of city history - about 50,000 pounds of it - was brought down, piece by piece, appropriately enough over a Memorial Day weekend.

The sound of buzzing power saws will be followed at noon Sunday by patriotic band music, musket salutes, wreath-laying, and Civil War reenactors marking Memorial Day. This year's annual public observance at Meade's grave will be held around the stump of the once-towering tree, cut down as a safety measure because of its weakened condition.

"Many tourists come to the Laurel Hill Cemetery, and they loved the tree because it was one of those that touched history; it was alive when famous figures from the past were alive," said Civil War author and historian Andy Waskie, a board member of the Friends of Laurel Hill Cemetery.

"Many battlefields, such as Gettysburg, have 'witness trees,' which survived the fighting and are honored."

The Meade maple "was something tangible and unique, so it's a tragedy to see it removed," he said.

The bottom of the tree "was completely rotten," cemetery superintendent Bill Doran said. "But this just goes to prove that all good things come to an end."

The tree's demise "is a major historic moment, because it was symbolic not only of the Meade family but Laurel Hill itself," said Pete Hoskins, president and CEO of Laurel Hill and West Laurel Hill Cemetery.

Dozens of cuttings from the Norway maple were rooted, but another species - possibly an oak - will likely be planted in the same spot, said Waskie, a Temple University professor and author of Philadelphia and the Civil War: Arsenal of the Union.

The best wood from the "Meade witness tree," as Waskie calls it, will be used to create souvenirs - pens, pencils, salad bowls, and walking sticks - to be shared with members of the Gen. Meade Society of Philadelphia and the Friends of Laurel Hill Cemetery - and possibly provided to others for a donation for preservation projects at the cemetery.

"You hate to see these old trees come down, especially those with so much historical significance," said Wilson Smith, chairman of Laurel Hill Cemetery and a direct descendant of John Jay Smith, who founded the cemetery in 1836. "But this will open up a vista" overlooking the Schuylkill.

The maple was likely planted in 1852 as a memorial to Meade's father-in-law, John Sergeant, a lawyer, congressman, and unsuccessful vice presidential candidate, Waskie said. Also buried at the plot is Meade's brother-in-law, Union Col. William Sergeant, who was mortally wounded in 1865 during the Appomattox campaign in Virginia.

The war took its toll on Meade, too. He was wounded in the arm and side during fighting at Glendale, Va. - one of the Seven Days Battles in 1862 - but recovered, returned to service, and went on to victory at Gettysburg.

The 1887 bronze equestrian statue behind Memorial Hall - made from melted-down Confederate cannon - portrays him at a critical moment during the fight and angled toward his grave. He had reined up his horse and looked across the field at a Confederate brigade heading toward a gaping hole in the center of the Union line.

With federal troops nowhere to be found, Meade planned to lead his small staff against the enemy, a sacrifice to buy time for the reserves he had called up. Help came on the afternoon of July 2, 1863, and that decisive split-second was captured by sculptor Alexander Milne Calder, Waskie said.

Waskie has sought to relocate the monument to a site near City Hall or the Benjamin Franklin Parkway to make it more visible and prevent vandalism.

At the time of the fighting at Gettysburg, Meade's wife, Margaretta, and the couple's children were living with her mother at 2037 Pine St. in Philadelphia.

"The city was in mortal fear during the battle," Waskie said. When the outcome was clear, "members of the Union League marched up Pine Street and serenaded Mrs. Meade to celebrate her husband's victory. They were surprised to learn that she didn't have her own home."

Out of gratitude for the general's service, a home at 1836 Delancey Place was offered to Meade - who politely turned it down - then to his wife, who happily accepted it in her name. The general remained on duty during the Reconstruction period, heading up the Military Division of the Atlantic in Philadelphia, where he sometimes attended shows at the Walnut Street Theatre and Academy of Music.

He and his wife were walking home from his headquarters near 12th and Chestnut Streets in 1872 when he suffered a severe attack of pneumonia, which, along with complications from his old wounds, led to his death on Nov. 6 at the age of 56. "I am about crossing a beautiful wide river, and the opposite shore is coming nearer and nearer," he reportedly said just before dying.

Meade's funeral on Nov. 11 - a day that would later become Veterans Day - drew dignitaries from across the country to the slope along the Schuylkill and the ever-present Norway maple, which was prominent in photographs, Waskie said.

He serves on the board of the Grand Army of the Republic Civil War Museum and Library in Philadelphia's Frankford section. The museum displays the preserved head of Meade's horse, Old Baldy, and its own tree collection - four trunk sections with embedded shells and mine balls fired during the war.

"We did all man could do to honor his memory during the august funeral. . . . May the virtue of his impetuous career of manhood enshrine [his grave site] and make it sacred to generations to come, whose homes he so bravely defended," wrote Sherman to Meade's widow. "May you and his children live long, to gather there [Laurel Hill Cemetery] at times to feel anew that love which governed his life."

Many more graveside ceremonies would follow, including one in 1898 featuring Gen. Sickles as the speaker. The impetuous Sickles had violated Meade's orders and moved his troops out from the main defensive line. He lost a leg to a cannonball in the process.

"The Norway maple lived well beyond its normal life span," Waskie said. "Gen. Meade's remains ennobled the tree, which was a direct, living connection to the past."

On Saturday, a small group of Meade admirers and history buffs watched certified arborist Matt Ward of John B. Ward & Co. Tree Experts supervise the tree removal, then stood over the huge stump. The tree "stood tall and strong, sheltering every Memorial Day," Waskie said. "This is a bittersweet moment."

Edward Colimore is a former Inquirer reporter who has written extensively about the Civil War and the history of Philadelphia. ecolimore@comcast.net