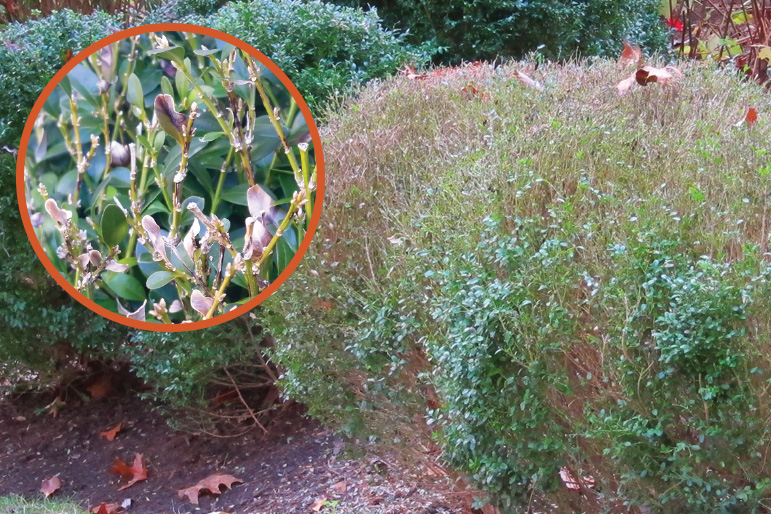 Boxwoods defoliated from Boxwood Blight and a closeup of the leaves

For several years, we have been raising concerns about Boxwood Blight, which is a new disease to our area, but luckily had been rarely seen. Unfortunately, late last summer, the culmination of two consecutive wetter-than-normal years resulted in an explosion of Boxwood Blight in our service area. Boxwood Blight is caused by a fungus that thrives in warm, wet conditions. It is easily spread by splashing water on clothing, pruning tools, or even animals walking through your garden. It affects the beloved American boxwood quickly, causing leaf spots, twig cankers and, eventually, plant death. Infected plant material must be removed from the landscape immediately when it is identified. This includes the soil below the plant, because the disease spores can survive in the soil, able to reinfect healthy boxwoods after years of dormancy. There is no fungicide treatment that can cure an infected boxwood and the preventive spray program recommended by researchers is intense: fungicides need to be applied every 10-14 days whenever the temperature is above 60ºF and there is a chance of the plants getting wet. This will still not guarantee that your boxwoods will not be infected.

If you have boxwoods in your garden, we recommend taking the following steps to increase the chances of avoiding Boxwood Blight:

Some varieties of Korean boxwood have shown resistance to Boxwood Blight, so there might be hope on the horizon, but the outlook is pretty grim for the scores of American boxwoods growing in gardens in the Delaware Valley. 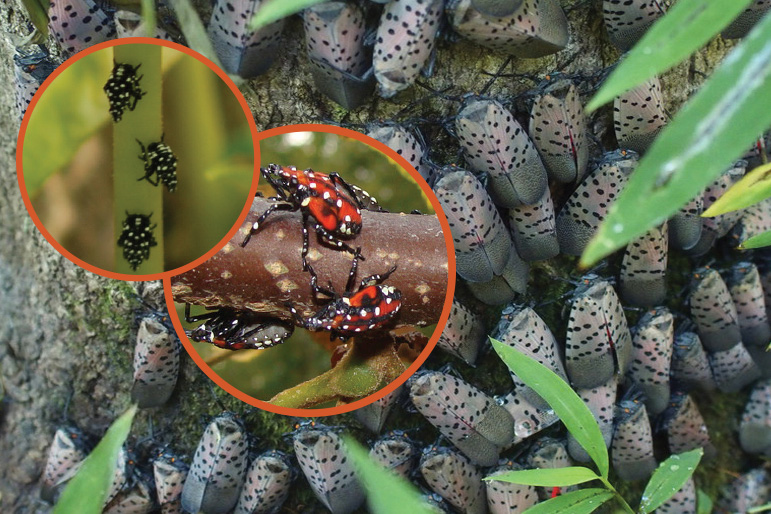 Since we reported on the Spotted Lanternfly (SLF) last year, it has entered our service area. In the late summer and fall of 2018, egg-laying adults began buzzing around Devon, Berwyn, and Wayne. The numbers were low, but the SLF lays hundreds of eggs at a time, so we are expecting to see some nymphs in the summer and more adults this year late in the summer. Its preferred host is the weedy invasive tree Ailanthus, but it seems to have found some of our native plants tasty as well, including maple, walnut, sycamore, and birch trees. When we believe that the numbers of SLF could threaten the health of our ornamental trees, we will begin recommending a treatment to keep the trees healthy. If SLF populations get very high, as they have in Berks County, some of the byproducts of an infestation might be unavoidable — namely sticky residue under trees, swarming SLFs in your yard, and even piles of dead bugs on patios and driveways. We are confident that we can keep SLF from harming your trees, but it looks as if there might be some unavoidable nuisances associated with SLF. We’ll do our best to help you keep things under control.